A Busy Day and Birthday Gifts

In the early morning I heard my cell phone rang. It was a SMS. I red it. It said :

“ Happy birthday, darling. May God gives you longevity, mercy, luck and affection. May you become a virtuous wife for me and a paragon for our kids. I love you so much”

It was from my husband. So sweet.

I looked at Rafif. He was sleeping, but there was something wrong. He breathed heavily. Oh God, his asthma relapsed. I took my cell phone and called his pediatrician. Unfortunately, she was in . She suggested me to take him to the emergency unit at Charitas hospital to be nebulized.

I asked Susan, one of my maids to accompany me taking Rafif to the hospital. I drove fast, as fast as I could. Rafif kept quite , I heard only his heavy breath a long the way. When finally we arrived at the emergency unit, a security guard helped me to park the car, while I took Rafif in hurry to the emergency room.

A nurse welcomed me, and Rafif was lied down. When she put the nebulizer tool on him, he rebelled and cried. He got up and tried to escape. I hugged him, calmed him down, “No, honey. It won’t be hurt. “He hugged me, and then the nebulizer worked. He felt relief. I was so happy seeing him smiling again.

In the pharmacy when I was giving the prescription to the shopkeeper, my cell phone rang. It was Wati, my sister-in-law. She said that my father-in-law came to my house, and then he fainted. I was shocked to know that. My father-in-law promised me to come to my house. He wanted to help me taking one of my cars to the police quarter for paying the tax. I felt guilty and I was worry about him. After I paid the medicine, I told the shopkeeper that I would take it later. Then I drove fast once again, went home.

I found him lied down on the sofa. His face was pale. I wanted to take him to the hospital, but he said no. “Don’t worry. I’m fine. I just need time to take a rest for a while. I suffered from vertigo, but it’s ok. I will be fine soon. You should go now, pay the tax; otherwise you’ll have to pay for the fine, due to the deadline. Don’t worry about me.”

I made him a cup of hot tea. I said “Father, please don’t go home until I get here. I will take you to the hospital and home after I finish paying the tax. Please don’t drive by yourself. It’s not safe. Ok?” He nodded.

After asking my maids to take care of him, I went to the police quarter. It was in the intersection and the traffic light was red when my cell phone rang. It was SMS from my aunty. “ Dewi, happy birthday. May Allah always bless you. I red Nova tabloid yesterday, and I was surprised when your photo and your story was there. Congratulation!”

I’d just remembered several times ago I sent my personal experience of cooking my husband’s favorite food due to a promotion of soy sauce product. I didn’t know that I could be the weekly winner! 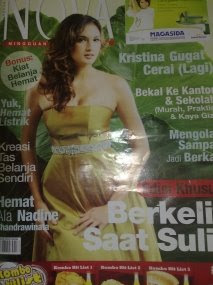 I bought the tabloid in the newspaper outlet nearby. Oh yes, it was me on the page 35. Ha..ha.. What a good news! 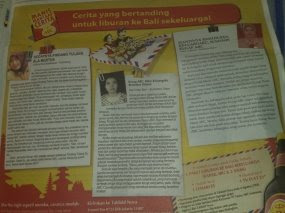 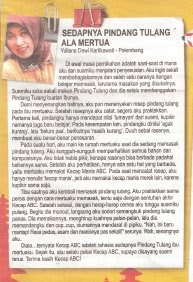 In the police quarter, everything runs smoothly. When it finished, it was 12:50 pm. I went home to see my father-in-law. But, he wasn’t there! My maid said that he went home after taking a medicine. I called him, thank God he was fine.

After praying Dzuhur, and had my lunch, I went back to the hospital to take Rafif’s medicine. I felt exhausted, but I should go. What a busy day!

My cell phone rang (again) in the way home. It was from my old friend, Dwi Parlina. She said she wanted to come to my house. I was enthusiastic because I miss her after long time no see. She lived in for two years .Before she and her family move to Bandar Lampung, she spent four days in .

It was nice to see her again. She came with her kids. She was still beautiful although she had already had three sons. We shared stories of our life and also our past. It felt so good to talk to a lovely friend like her.

Her coming and becoming the weekly winner were the sweet birthday gifts for me….

Posted by Juliana Dewi Kartikawati at 3:08 AM

Email ThisBlogThis!Share to TwitterShare to FacebookShare to Pinterest
Labels: Diary